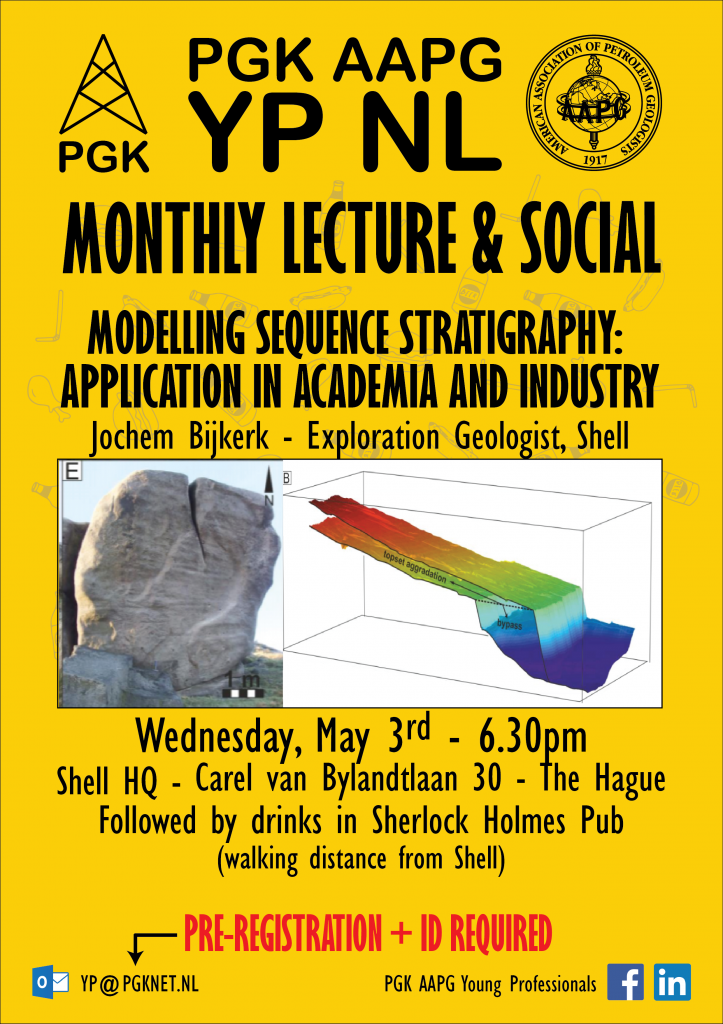 Please note that pre-registration by sending an email to yp@pgknet.nl is required and you need to bring photo ID with you to gain access to the building.

During my MSc at Utrecht University, I started to model sequence stratigraphic patterns, and I continued doing this during a PhD project at Leeds University. In both cases I was looking at detailed additions such as climate effects to the original sequence stratigraphic concept. Only after I joined Shell I realised how sequence stratigraphy is applied in exploration and what data is commonly available.
Typically, the data does not permit testing the sophisticated ideas I worked on previously, which triggered the question whether there is a use to the academic work. Sequence stratigraphy was originally developed to aid hydrocarbon exploration by relating e.g. sand or shale presence to geometries in seismic data. It has greatly improved predictions of subsurface geology, and resulted in numerous hydrocarbon discoveries. Its success in the oil and gas industry is related to its simplicity: by using only sea level fluctuations as a controlling variable, both sand presence, shales, potential source rocks, and a rough estimate of geological time can be established.
From a scientific point of view, this concept is oversimplified. Seismic geometries are non-unique and result from the balance between accommodation (relative sea level variations) and sediment supply (e.g. climate variation, uplift in the source area etc). By only looking at relative sea level variations, additional controls such as climate are ignored. In academia, it is attempted to unravel the relative importance of these additional controls besides sea level. One method to do so is the use of models, because this allows the isolation of individual controls.
This talk will explore the effect of these controls based on analogue models, whether they can be recognised in the real world, and how awareness of such controls can benefit hydrocarbon exploration.