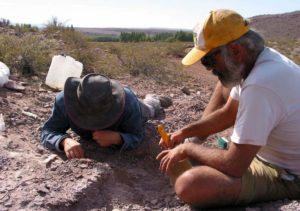 Tom Barnes describes in an article how palaeontologists are shocked to find remains examples of herbivore living in what was likely a desert.
Palaeontologists have unearthed the remains of a previously unknown species of dinosaur that lived 110 million years ago in Argentina. The remains of three separate members of the new species, an adult and two juveniles, were discovered by a team of Spanish and Argentinian scientists at a site in Neuquen in the centre of the South American country.
The new species, named Lavocatisaurus agrioensi, is a member of the herbivourous group of dinosaurs known as sauropods, which includes the likes of the diplodocus and brontosaurus.

Read the full article via this link.